Skiing the volcanos of CHILE

Trip report and general information about ski touring in the area

SKI-MOUNTAINEERING IN THE ANDES

The most favorable conditions for skiing in the Andes are found between the latitudes 33 ° – 43 ° S, which correspond in Chile to the large area between Santiago and Puerto Montt.  On the Chilean side, the Auracanìa territories between Chillan and Los Angeles, the Bio-Bio between Los Angeles and Temuco, and the lakes region between Temuco and Puerto Montt, offer magnificent ski terrain on volcanoes, at altitudes around at 2000 – 3000 m, ; most of them  are feasible by ski in one day.
The Club Avalco explored the argentinian side for the first time in 2011; then in 2015 it was the turn of the Chilean side, which has easier access to the mountains.

Logistics.
International flights arrive in Santiago, then with a domestic flight we reach Temuco or Puerto Montt; alternatively the “collectivos” may be a good option (buses that travel day and night and offer comfortable seats that can be converted into beds). In order to reach the valleys the most practical solution is renting a car, preferably a 4WD pickup, given the state of the roads and the possible snow cover.

Purchases on site.
Technical food (such as dehydrated meals) is difficult to find; standard outdoor gear (such as gas cartridges) may be found in major cities. In Santiago the best mountain shop is probably La Cumbre in Providencia; it has quite a broad supply of climbing and trekking gear, but little or nothing for ski-mountaineering. 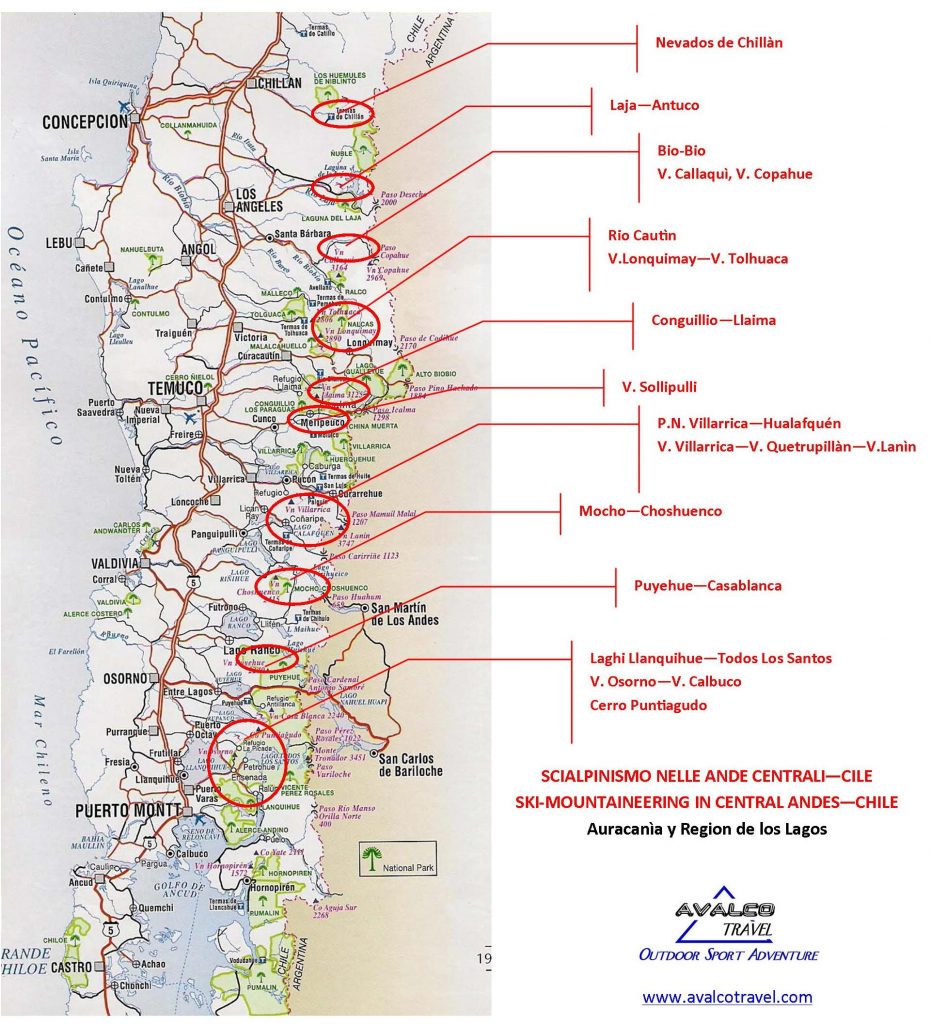 Climate
The best period for ski touring is september and october. August is still a winter month, considering the conditions of the mountains and the road access. Temperatures at 1500 m altitude vary from -6°C (min) to +10°C (max) as average in the northern region; the same applies for the southern region at altitude of 1000 m.  Wind is very often present; windchill effect might be significant.
As for wheather forecast, we suggest to consult www.mountain-forecast.com, where detailed information are given for all the volcanoes and at different elevations.
Volcanic activity (fumes, eruptions, lava flow, quakes) is monitored and updated on this site www.sernageomin.cl/volcanes-mapas.php.

Roads.
The Ruta 5 (panamericana) is the main road in Chile, rather fast and well maintened. Roads to the valleys are generally in fair conditions, better than on the Argentina side. Some passes between the two countries are closed in winter

Comunications.
In many mountain areas there is no mobile coverage, except at ski resorts. For safety,  a satellite phone is recommended.

Safety.
Most mountain areas see very few visitors, except the ones with ski resorts (closed after end of september – mid october).
It does not exist an organized rescue service covering the whole Chile; in case of emergency one shall call Police (113) or Conaf (within the natural parks and reserves). In any case, the efficiency of a rescue is not guaranteed since there is no standard protocol. The voluntary organization Socorro Andino of Santiago (http://www.csachile.com/) has limited staff and coverage. There are no helicopters available for rescue operations, with very few exeptions.
As a conclusion, one has to rely only upon self-rescue and accept all related risks and limitations.
There are no dangerous animals in the territory, except the puma (mountain lion) which is very elusive and seldom spotted.

Formalities within the country
In some areas managed by Conaf an entry permit may be requested, generally it can be obtained at the entrance.

Maps and Guides.
email club@avalcotravel.com to ask for the suggested maps and topo guides, both online and on paper. 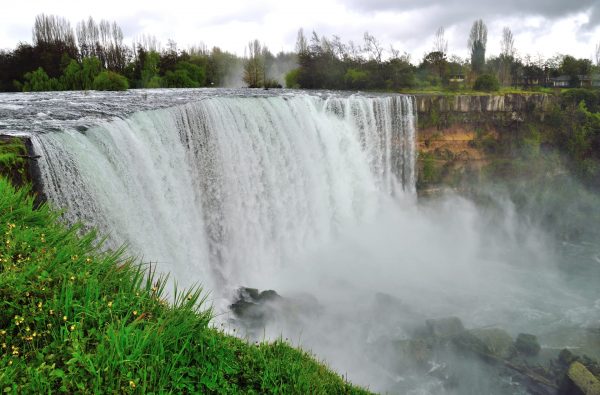 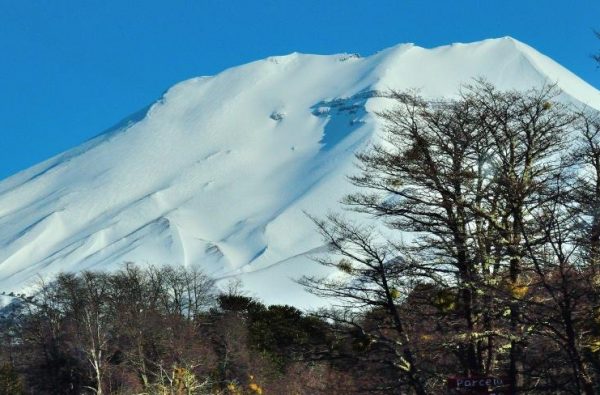 From left: the Lajafalls nearLos Angeles, the volcano Lonquimay, the Petrohué canyon.

The main valley is reached from Chillan via Ruta 5; approximately 80 km to Las Trancas 1200 m.
Termas de Chillan is one of the best ski resorts of Chile. It offers 35 km of ski slopes between 1450 m and 2400 m, plus the famous hot springs. Among the recommended ski touring objectives, the Volcàn Chillan Viejo 3198 m and the nearby Volcàn Chillan Nuevo 3186 m, are both easy (crampons just for the summit in case of ice), then the Volcan Vidaurre 2972 m and the Volcan Nevado (norte) 3212 m. For Cerro Las Minas 2987 m you should consider two days with bivouac in tent (there are no huts). 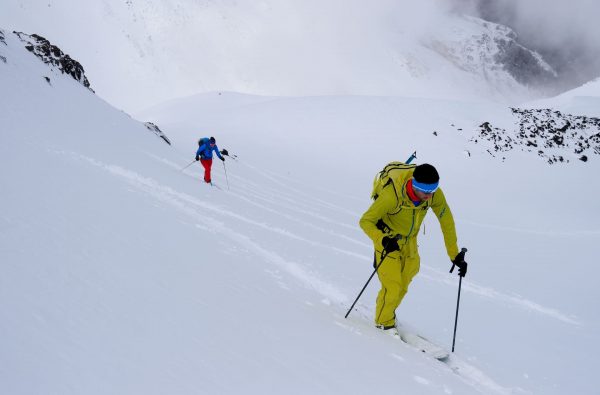 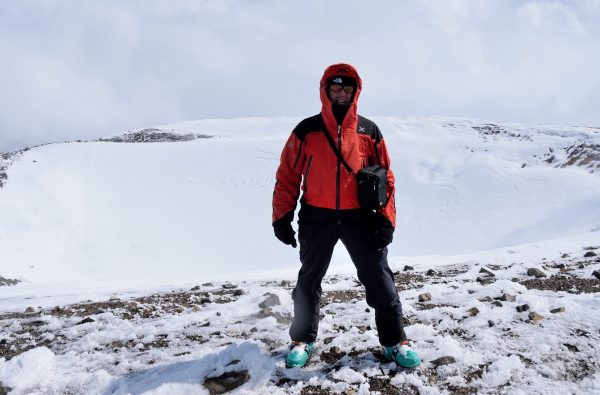 Nevado Chillàn Viejo: skinning up, and (right) on the crater at the summit. 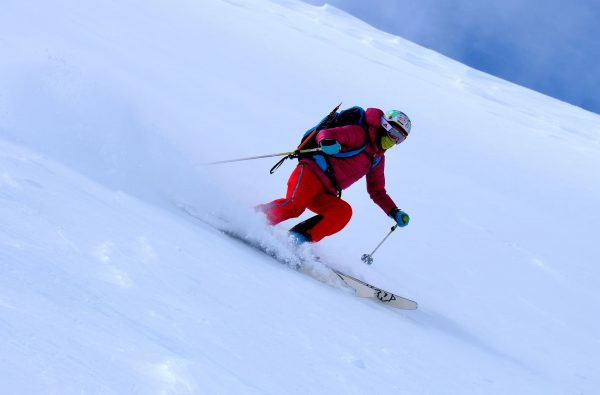 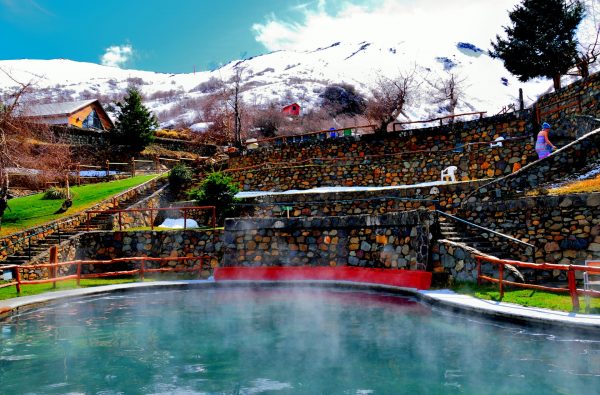 VALLE DEL LAJA – ANTUCO
The access road is asphalted till the village of Abanico, then a gravel road (4WD recommended) leads to the small Chacay ski resort 1450 m, near the beautiful laguna Laja.  In this valley we suggest to ski the Volcano Antuco 2979 m, getting a bit steep close to summit (crampons useful), and featuring great views of the Laguna Laja, and Sierra Velluda 3585 m via the north side (Glaciar Abanico); with some climbing difficulties one can reach the la Cumbre Principal or the Cumbre Sur. 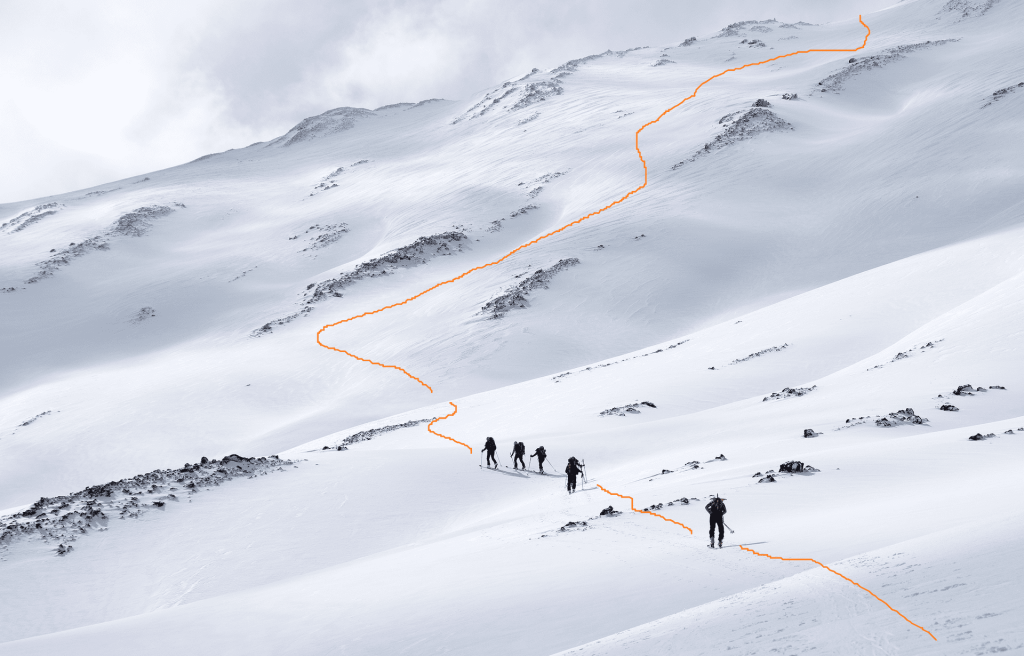 The lower slopes of Antuco volcano.

LOWER VALLE DEL BIO-BIO
This valley is reached from the town of Los Angeles via the provincial road Q-61-R.
The Volcano Copahue 2963 m can be summited via the north-east slopes; on the argentinian side there is a spectacular lake of boiling lava.
The Volcano Callaqui 3164 m is a long and wild itinerary, with an approach of 2 hours in the forest, before reaching the upper slopes which are good for skiing.

VALLEYS CAUTìN E LONQUIMAY
Road acces from Ruta 5 then 181 to Victoria or the S-11-R from Lautaro, then Curacautìn then Manzanar – Malalcahuello.  In this valley you cannot miss the Volcano Lonquimay 2856 m, starting from the Corralco ski resort, a classic tour, very interesting also for the possibility to ski inside the crater. 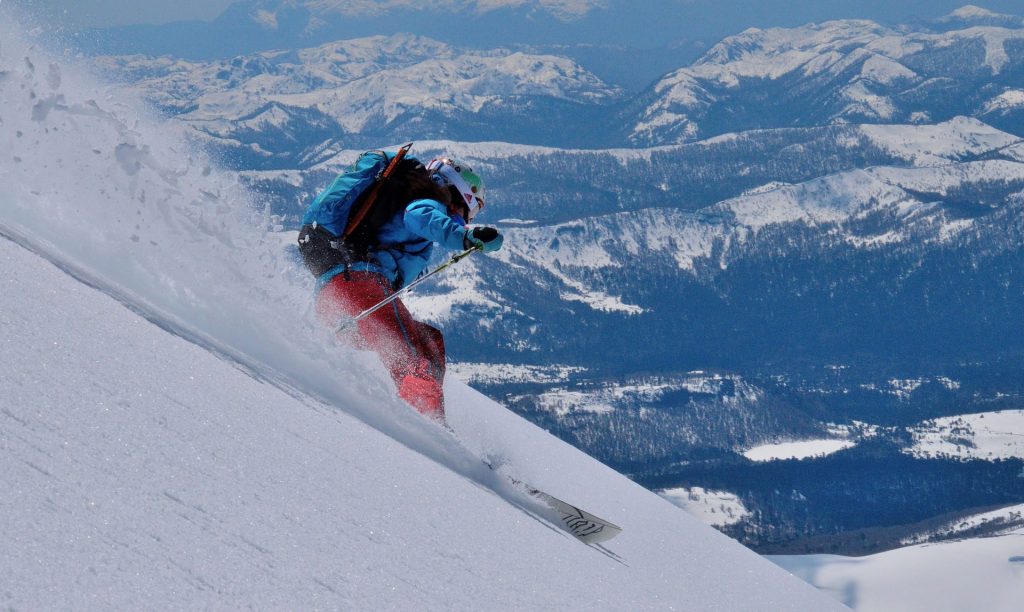 Skiing the eastern slopes of Lonquimay.

Vulcano Tolhuaca 2806 m is also a nice tour, less known than Lonquimay maybe due to a complex road approach.
For the well trained skiers it is possible to ski both Tolhuaca and Lonquimay in the same day.
Sierra Nevada 2554 m is well visible from Malalcahuello and offers attractive slopes above the forest line. However the approach in very long and mostly on foot till 1500 m altitude. 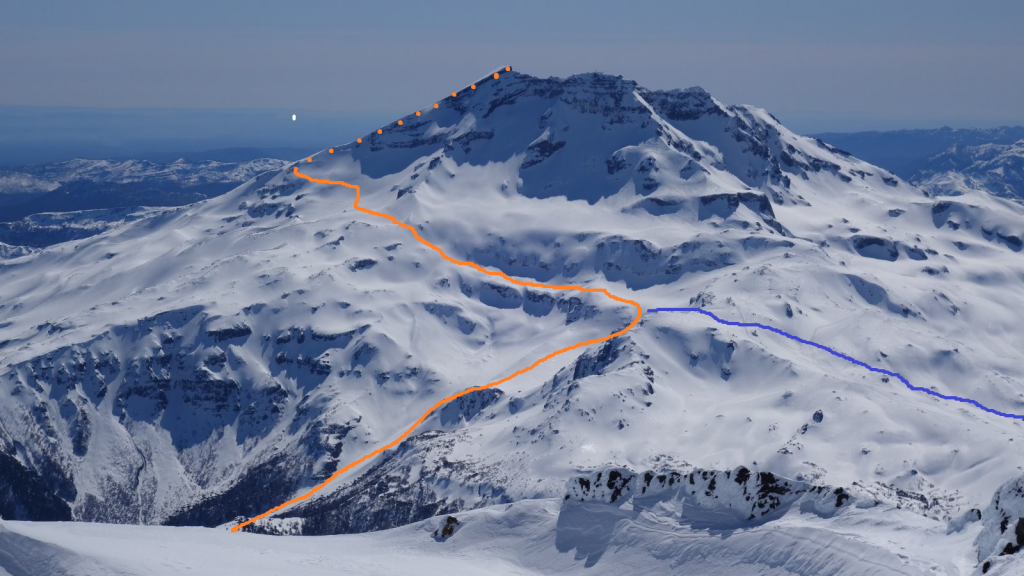 CONGUILLIO NATIONAL PARK
The volcano Llaima 3136 m is a prominent peak in the middle of the park. It can be ascended from the west, starting at the Las Araucarias ski resort, or from the north starting near Laguna Conguillio.  It is possible to ski down the west face but it is recommended to check the conditons since it is often icy. 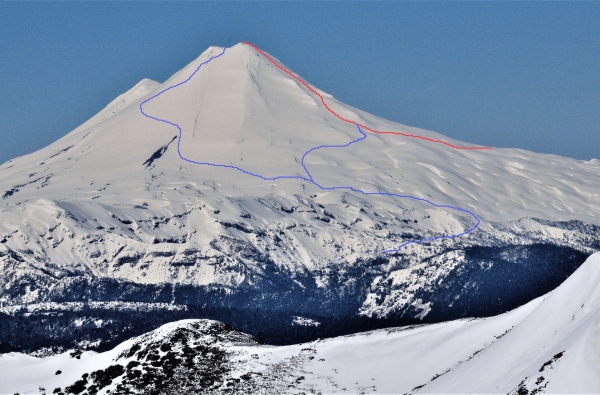 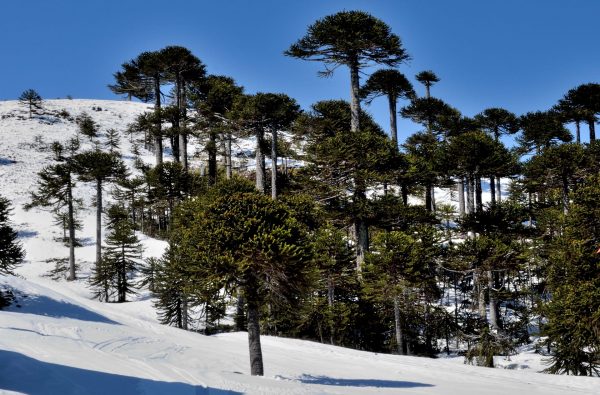 Left: the north aspcet of Villarrica. Right: the typical araucarias.

Road accessi is from Ruta 5, take exit Freire (if coming from north) or Loncoche (if coming from south), then pass Villarica on the lake, till Pucòn, one of the most famous tourist resort of Chile. The active Vulcano Villarrica 2847 m is reached from the Villarica-Pucon ski resort, on the north side, a classic and beautiful tour with great views over the lake. A wilder itinerary is from the south-east, but rather strenuous.

Contrary to Villarrica, Quetrupillàn Volcano 2360 m is not active; the upper section offers easy slopes for nice ski turns.  However the most ambitious objective in the area is the Volcano Lanìn 3776 m. By car one has to drive east of Pucòn, pass Curarrehue till the Mamuil Malal pass (if the road is snow ploughed), on the border with Argentina, at 1200 m altitude. The summit of Lanin can be climbed in 1 or 2 days, with optional overnight in one of the three bivouacs situated along the north-east ridge (very basic huts with just a table and a few berths). Various lines are possible, all offer a great skiing on moderate to steep slopes. Crampons are needed to reach the summit.

MOCHO – CHOSHUENCO PARK
Road access via Panguipulli and Huilo Huilo falls. The most interesting objectives are Volcano Mocho 2422 m and Volcano Choshuenco 2415 m (the main summit has some passages of rock); the starting point is on private land for which an authorization is requested

PUYEHUE PARK
Puyehue 2240 m is an active volcano (last eruption in 2011), having a beautiful but long itinerary on the south-west side. The Volcano Casablanca 1990 m is reached starting from the Antillanca ski resort and offers easy and enjoyable slopes. 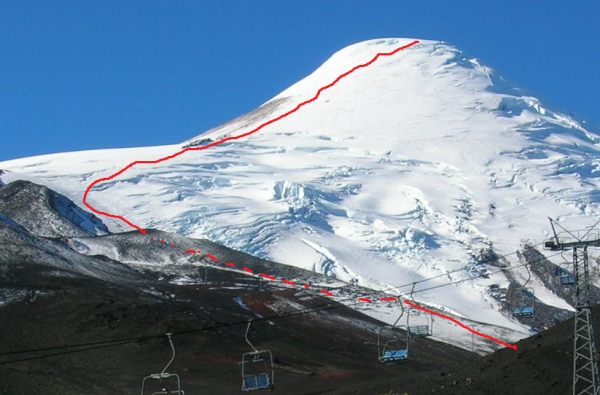 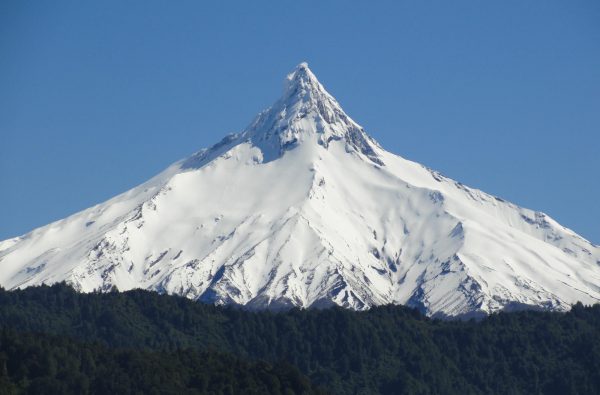 The most recommended ski tour is Volcano Osorno 2662 m, the normal route along the south-west slopes starts at the Osorno ski resort; the last 30 m below the summit are steep (45°) and often icy .
Volcano Calbuco 2015 m, is a beautiful itinerary but most of it is done on foot; overnight possible at Calbuco Hut 1100 m. Is worth to mention Cerro Puntiagudo 2493 m a mythical peak which has attracted generations of climbers both local and from Europe. It is an extinct volcano with a very characteritic sharp shape, demanding a technical climb to the summit. It is definitely not a ski touring objective, but we mention it here as a provoking proposal to the most adventureous steep skiers. Access is from the Rio Sin Nombre valley.